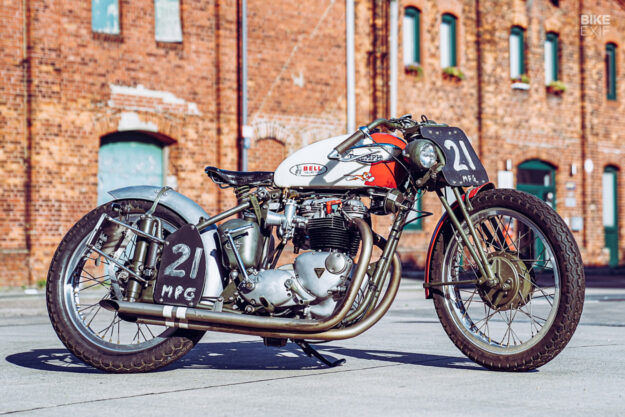 It’s not uncommon for a custom build to have a few stories behind it. Sometimes a donor bike has a unique history, or maybe its parts are pulled from an unlikely source. But it’s not every day we find a builder who fabricates both the machine and the story behind it.

Meet Thorsten Schlesinger, the builder of the British hodgepodge you see here. Nicknamed ‘Ms Rosi Nante,’ it’s a stunning example of a classic TriBSA—a Triumph engine in a BSA frame. 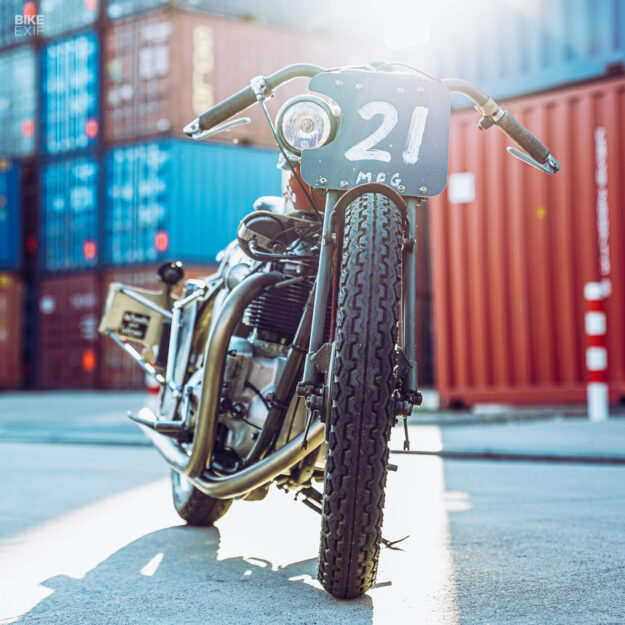 Thorsten got the idea for Ms Rosi when he happened upon the remains of a 1949 BSA A7. He had the frame media blasted, then finished in olive green like the WWII bikes of the era. Looking at the military-inspired frame got Thorsten’s creative juices flowing, and before long he had created an entire universe for his build-to-be.

Think of this TriBSA as WWII fan fiction meets two-wheeled cosplay. The year is 1945, and the Second World War has just ended. A soldier in the US Navy is finally headed home, but he just can’t bring himself to leave his trusty BSA sitting overseas. 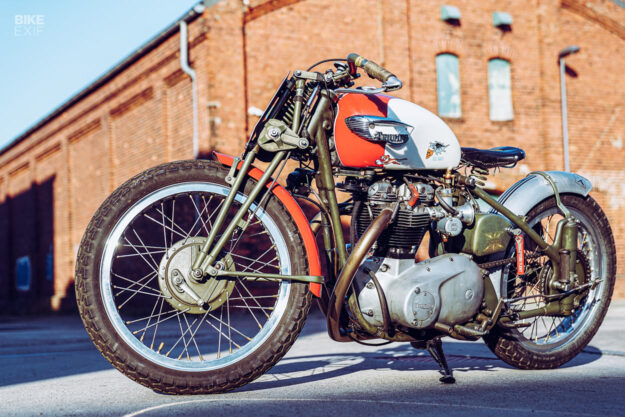 He manages to bribe the loadmaster of his aircrew with a few bottles of brandy, and a spot for the battle-worn bike is secured on the next flight home. In typical boomer fashion, he wastes no time getting married (to a woman named Rosi) and starting a family once he gets home.

The years march on, and the BSA sits neglected in the garage behind his Ford Falcon, until the children are grown up and out of the house. Come 1965, our veteran finds himself with an empty nest and nothing but time on his hands. So naturally, he turns his attention back to rebuilding his old war horse, working on it in the evenings with the help of his friends. 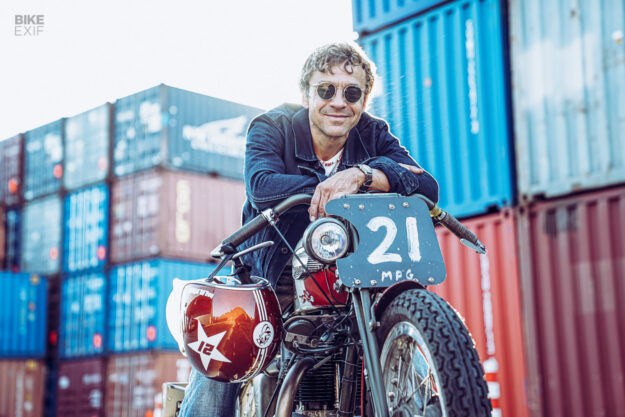 In reality, Thorsten’s a product designer—but he’s a sucker for history. “For me, the stories around a bike are a self-imposed rule,” he says. “They make the whole thing more interesting for me.”

With that backstory in mind, Thorsten built Ms Rosi as his take on what a veteran’s hot-rodded BSA build from the mid-60s would look like. Looking over the bike, you’ll realize his imagination and attention to detail have created one of the most authentic time capsules on two wheels you could ask for. 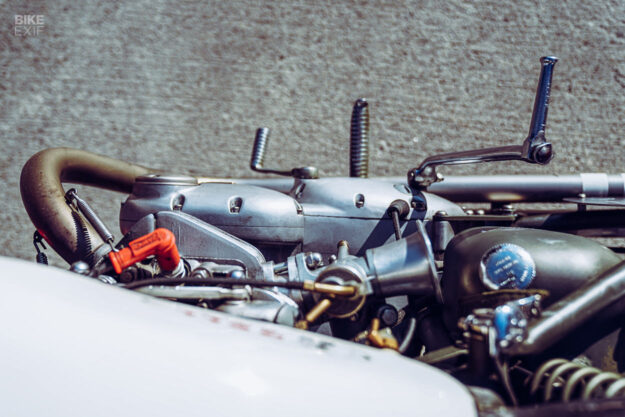 For starters, Thorsten imagined this alter ego would likely take his hopped-up twin out racing on the weekends, be it dirt track or salt flats. So the old 500 cc twin engine was swapped out for a vintage Triumph 650 mill—a popular option for hot-rodders of the era. Thorsten punched it out to 750 cc for good measure.

A larger oil pump was fitted for reliability, and a set of Amal carbs was added to get Ms Rosi breathing properly. Thorsten also fabricated a set of straight pipes from stainless steel, a nod to the rowdy and raucous days before words like ‘EPA’ and ’emissions standards’ were on anyone’s mind. It’s safe to say you’ll hear Rosi coming before you see her. 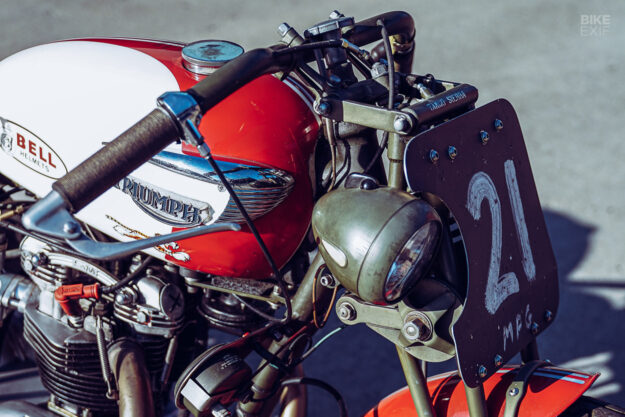 The front end uses a girder fork from a 1938 Velocette, a clear reference to the BSA M20s that were in service during the Second World War. The girder looked fantastic, but Thorsten says it was far too flimsy to handle the extra power of the big twin engine. To this end, he and a friend replaced all the original tubing with thicker steel and reinforced welds, preserving the original form but making the bike safer and much more ridable.

Matching the light, sporty character of the machine—and its narrative—are a host of other touches. The fuel tank is a US-spec Triumph unit, slimmed down further by Thorsten. Then there’s the Brooks saddle, the Lucas headlight and the hand-wrapped hemp grips. 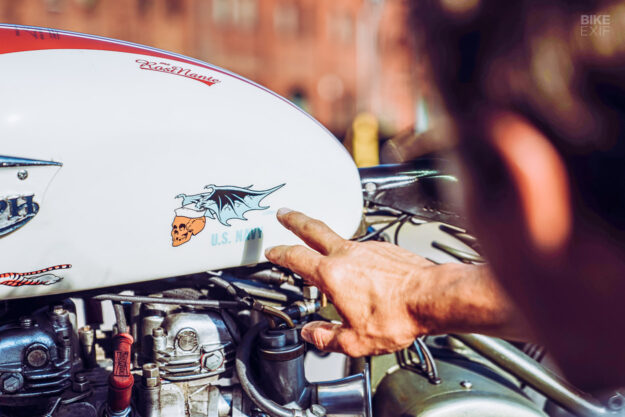 But it’s the really small details that sell it. Take the decals on the gas tank, for instance—all three are genuine NOS stickers from the 1960s, including the classic Triumph Tiger logos and the authentic Ed Roth/Rat Fink flying skull. Thorsten even went so far as to track down a vintage Shell Oil service sticker from the era, which now sits on the back of the bike’s oil tank.

The time capsule theme continues with the chronometric Smith’s speedometer, which Thorsten painstakingly tracked down with a KPH readout, in service to the bike’s imaginary European origins. The clock sits on a custom-made bracket, painted to match the olive green frame, and looks like it was pulled straight from the cockpit of a WWII fighter plane. 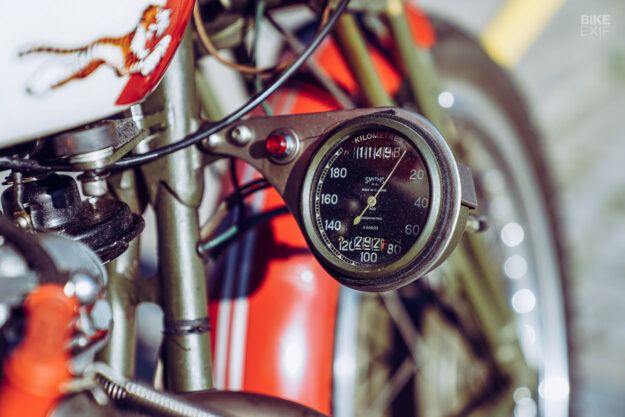 Although Thorsten spent the better part of four years getting Rosi just right, he wasted no time getting it out on the road once it came together. As a celebration of the build’s completion, Thorsten rode it all the way from Bremen, Germany, out to the coast of France—a 1,000-plus mile round trip.

He did it wearing a set of leathers he stitched himself, with an authentic WWII rain suit in his luggage, just in case. 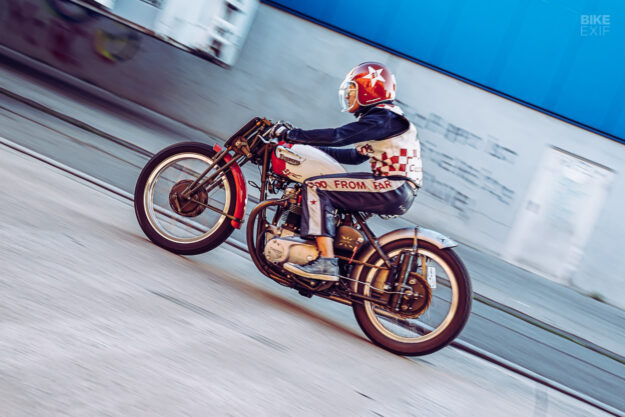 We can’t say we’re surprised, given Thorsten’s uncompromising commitment to character. After all, it’s little details like this that make any work of fiction believable. 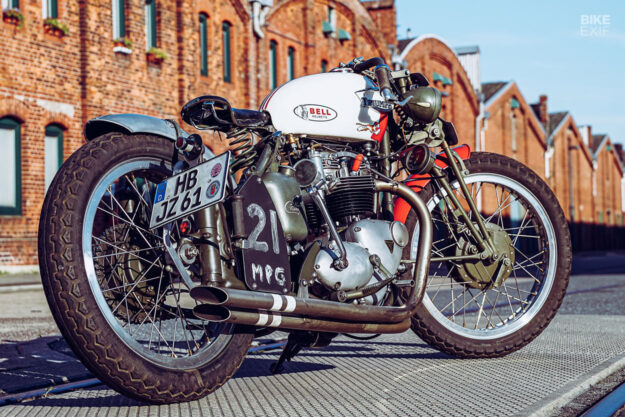