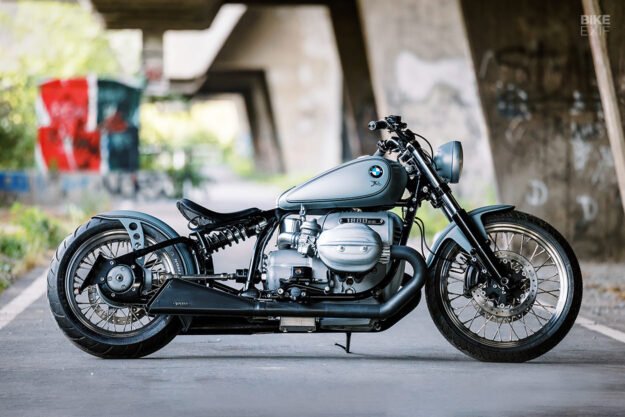 We live in a world where you can stream entire discographies of music straight to your phone, yet vinyl sales are booming. Technology might be advancing at a relentless pace, but we’re still drawn to analog things—either for their charm, or for the sake of our own nostalgia.

In this context, neo-retro motorcycles are something of an anomaly. They look vintage, but they’re loaded with features that weren’t around back then—like catalytic convertors and electronic rider aids. This BMW R18 from Kingston Custom shatters that mold. 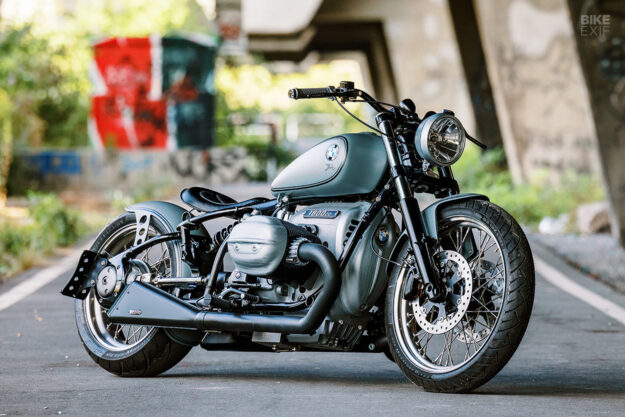 On the surface, it looks like a gentle, albeit tasteful, visual reworking of BMW’s monster cruiser. But the real genius here, is what you can’t see—or, more accurately, what isn’t there. This R18 runs without fuel injection, traction control, electronic rider modes or ABS.

Removing all of that from a modern motorcycle is arguably far harder than changing its looks. So why did the man behind Kingston Custom, Dirk Oehlerking, even bother? Simple: he was asked to. 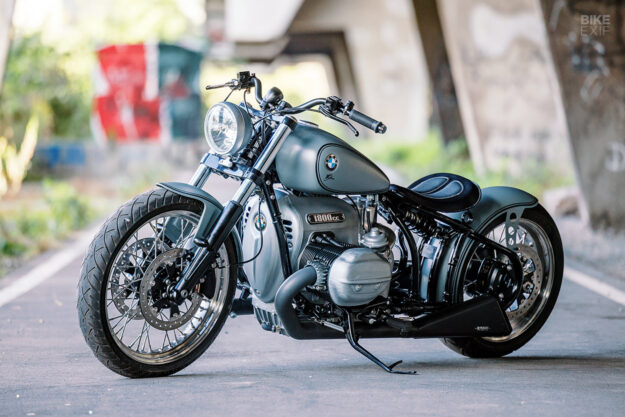 It all started with a chance meeting last year, at the St. Moritz Automobile Week, in Switzerland. Dirk was there to compete in the Kilomètre Lancé with his jaw-dropping ‘Spirit of Passion’ custom R18, which, unsurprisingly, garnered much attention. That’s how he met Kurt A Engelhorn—the founder and organizer of the prestigious classic automobile festival.

“I got to know Kurt through the bike and had some intense petrolhead talks with him,” Dirk tells us. “He challenged me, and asked me if I could rebuild a BMW R18 with very simple technology. Without fuel injection, ABS, a CAN bus; something like the Concept R18, with a carburetor.” 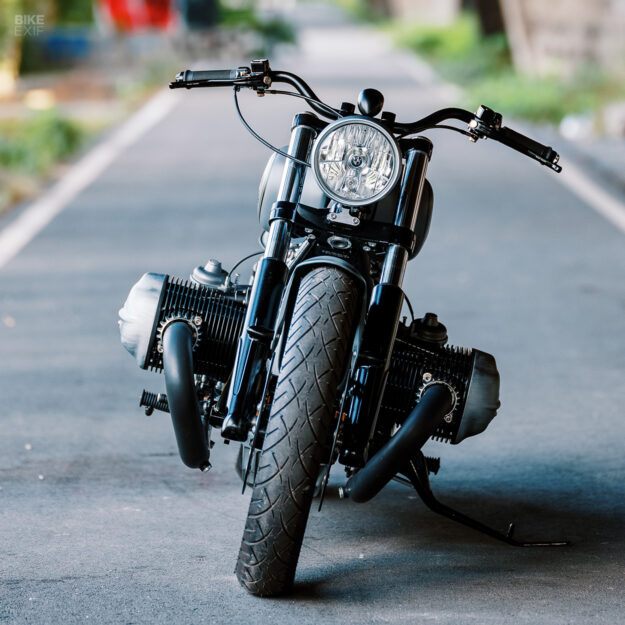 “I replied that it was no problem at all. These days, you can build almost anything—and after all, BMW themselves did it.”

“At the end of the event, we exchanged contact information. At the time, I had no idea that this interesting man was also the organizer of the St. Moritz Automobile Week. A few days later, his R18 arrived in my studio—and, after a few phone calls, it was clear that this would be a special project.” 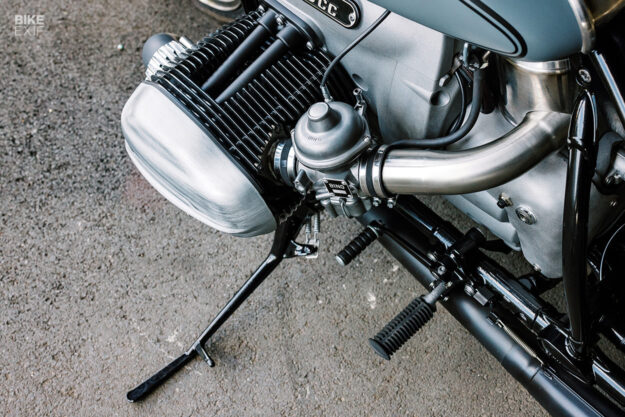 Dirk started by disassembling the bike, so that he could figure out exactly how he was going to pull off what he was planning. The chunky plastic cover that normally sits at the rear of the R18’s engine block went into the bin, post haste. The lower half of that space is now filled by a handmade box that hosts the ignition key and starter button.

Mounted on top of that is a custom airbox, feeding a pair of 40 mm Bing carbs—the kind you’d find on a classic boxer, only bigger. Dirk had a BMW R51/3 in the shop at the same time as this project, so that’s where the inspiration for the airbox design came from. Owners of older BMWs will recognize the fuel taps too. 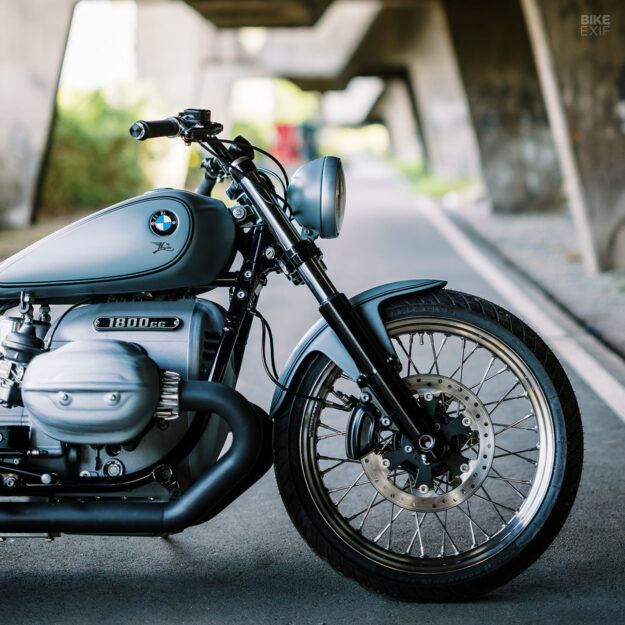 As you’d imagine, none of this was plug-and-play stuff. Dirk had to get around the BMW’s ignition and CAN bus system, and he had to modify the carbs themselves. But he’s keeping shtum on exactly how he pulled it off.

De-modernizing the R18 went beyond just changing its fueling system. Dirk took the transmission apart to remove the bike’s electric-powered reverse gear too. And he removed the ABS system from the OEM brakes. 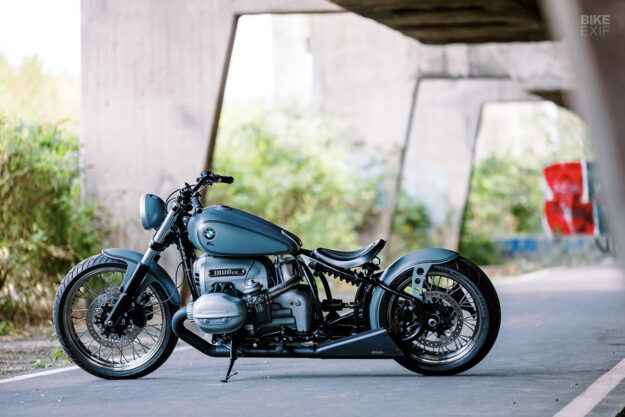 Visually, this R18 is as tidy as they come. Dirk went for a stripped-down bobber aesthetic, to mirror the changes he had made under the hood. So there’s nothing left on this BMW that doesn’t absolutely need to be there.

Peek under the seat, and you’ll see just how meticulous Dirk is. There’s nary a wire in sight, and the battery’s now held by a custom-made bracket underneath the transmission. 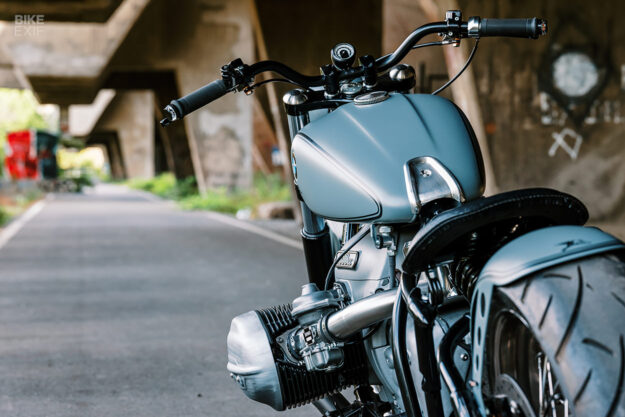 The bodywork is a mix of OEM and custom bits. A BMW R nineT headlight sits up front, with an aftermarket Harley-Davidson seat out back. The rear fender is a custom piece, and holds a pair of tiny taillight and turn signal combo LEDs from Kellermann.

Dirk upgraded the cockpit with a set of 1” handlebars and risers from BMW’s own aftermarket catalogue, fitted with new grips, a classic cable-operative throttle, and Rebuffini brake and clutch controls. The speedo and bar-end turn signals are Motogadget parts. 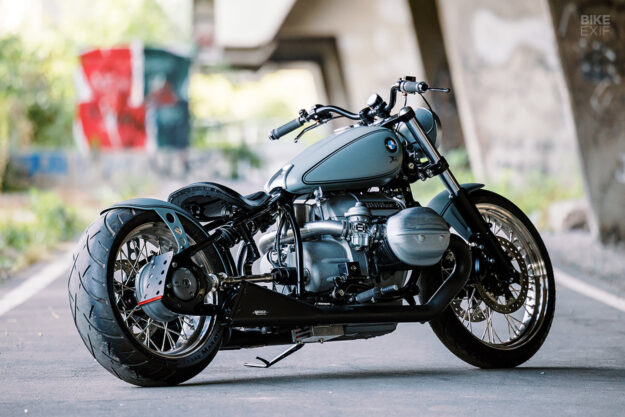 To fine-tune the bike’s stance, Dirk lowered the front forks, and swapped the stock wheels out for a 21F/18R set. The front fender was tweaked to fit the bigger wheel, while a side-mounted license plate bracket finishes off the rear.

Dirk also fixed one of the R18’s most unsightly features—its bulky ‘fishtail’ exhaust design. A pair of Rough Crafts mufflers were fitted instead, modeled after those on BMW’s original R18 concept bike. 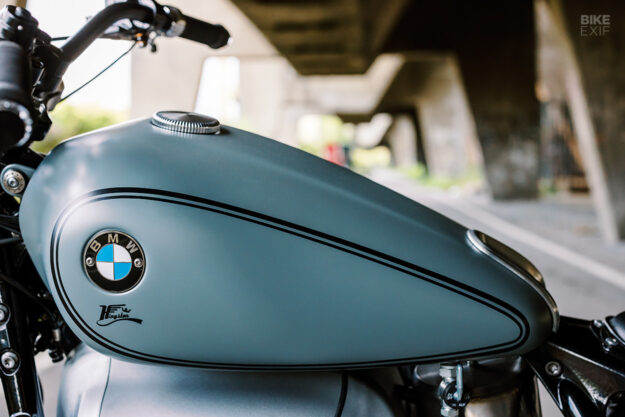 As a finishing touch, Dirk picked a classic pin-striped livery that’s just as restrained and tasteful as the rest of the build. Appropriately dubbed ‘Good Vibes,’ the bike was delivered to Herr Engelhorn at the 2022 edition of the St. Moritz Automobile Week.

There, Dirk piloted it over the Bernina Pass in the Swiss Alps, without an iota of electronic interference between his throttle hand, and the massive pistons shuddering beneath him. 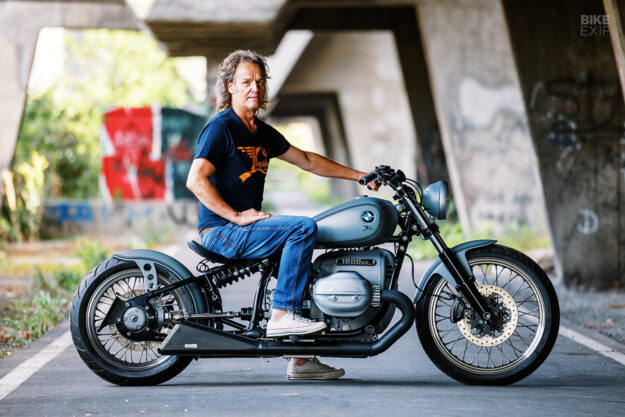