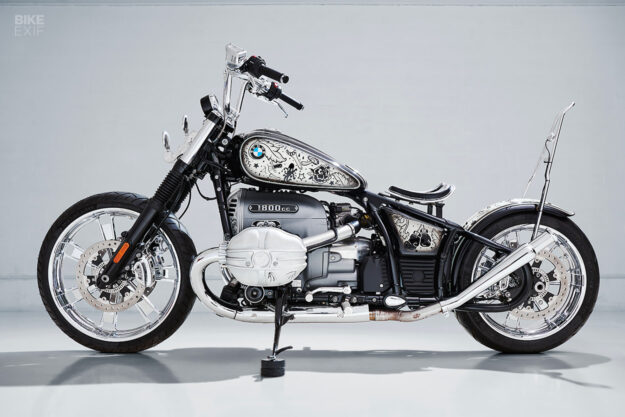 Despite its initial lukewarm reception, the BMW R18 has become a regular fixture on the custom scene. Numerous workshops have customized the bulked-up Bavarian boxer in myriad ways—but there’s one style we haven’t seen yet. Until now, no one’s tried to turn it into a chopper.

Enter Nick Acosta and his Toronto, Canada-based shop, Augment Motorworks. When tasked with customizing a BMW R18 by BMW Motorrad Canada, Nick drew inspiration from the classic choppers of the 60s and 70s. BMW do call the R18 a ‘cruiser,’ after all. 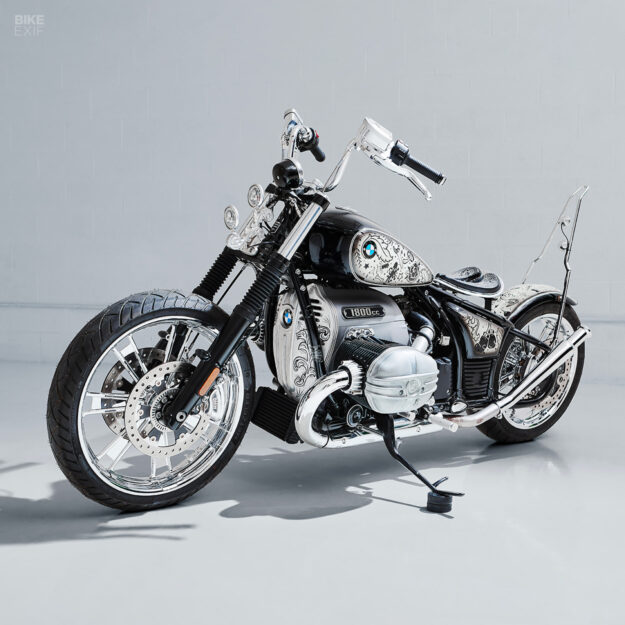 Augment started by stripping the R18 down to the bare essentials, so that they could figure out what to keep and what to bin. In the end, the OEM fuel tank was the only piece of the bodywork left intact.

A quick visual hit came in the form of a pair of polished alloy wheels from BMW’s own aftermarket catalog. Measuring 21” in the front and 18” in the back, they do a lot to push the R18’s stance further into chopper territory. The tires are Metzeler ME 888 Marathon Ultras, designed for cruisers and touring bikes. 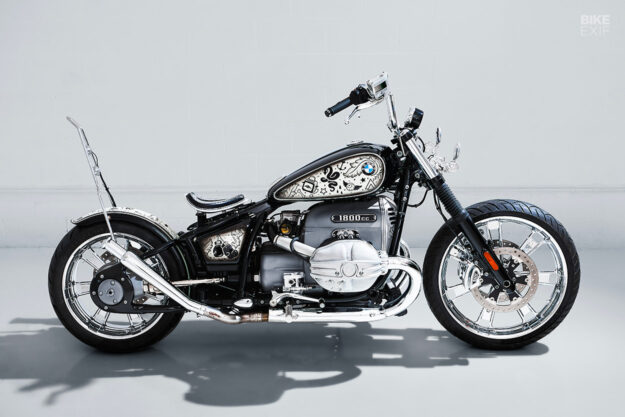 Augment also fitted a new set of aftermarket BMW engine covers, but sandblasted them to create a raw effect. Working with a brand new modern motorcycle meant there was no need to fiddle with the engine, but Nick was keen on exposing the intake and throttle body. So the crew removed the plastic cover that normally rounds off the back end of the engine block, and starting repackaging things.

The R18 is now sporting a custom-built aluminum intake system, with a pair of open stacks. Nick assures us that this is just for show, and that pod filters can be installed in a jiffy if necessary. To clean the space up, Augment tucked all of the wiring that used to live there up underneath the fuel tank. 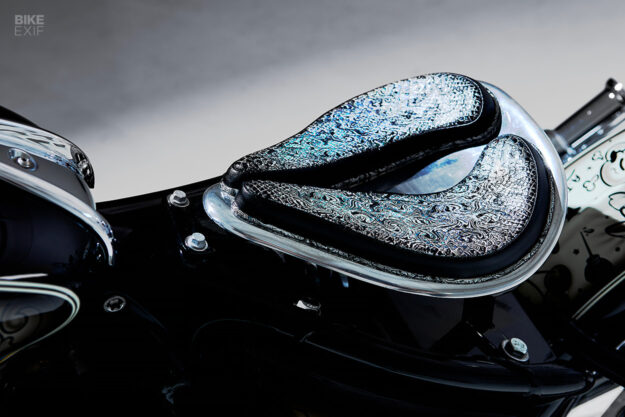 Further back sits another custom piece; the R18’s chopped saddle. Augment made the seat pan out of sand-cast aluminum, then handed it over to Dave at Raven6 to finish off. He polished the top surface to a near-mirror finish, and left the bottom raw to create some contrast.

The upholstery features an intricate psychedelic pattern up top. And despite how thin it is, it’s actually more comfortable than it looks, thanks to the dense race seat foam that Augment used. 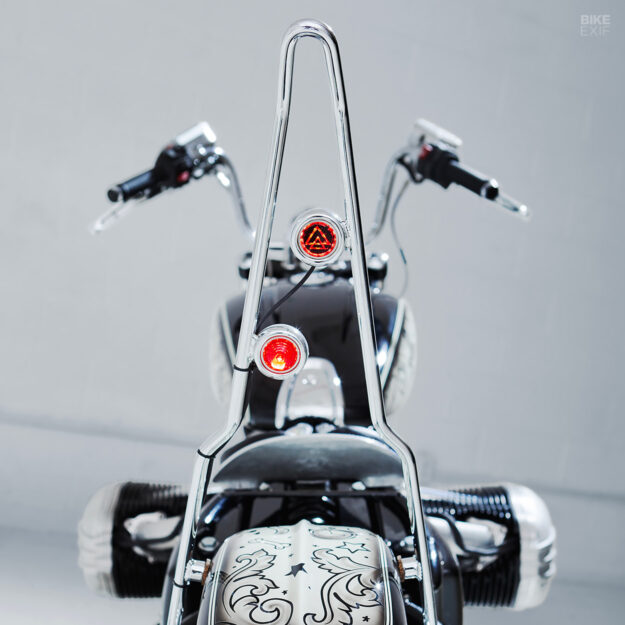 The seat floats above a custom made rear fender, supported by a generous sissy bar. Resplendent in chrome, it also holds a pair of weld-on taillights from Prism Supply Co.

At the opposite end, a pair of LED ‘pancake’ headlights from FNA Custom Cycles light the way. Augment managed to wire them directly into the R18’s stock circuitry—but creating the filigree bracket that holds them took considerably more work. According to Nick, it was hand-carved from a block of aluminum. 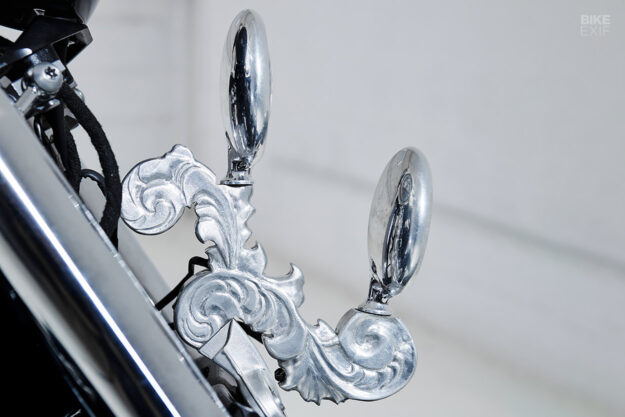 A set of ape hangers adds another hit of chopper style; found at a vintage swap meet years ago, they’d been sitting in the workshop, waiting for the right bike. The guys kept the controls stock, but added reservoir caps from BMW’s catalog, and bar-end turn signals from Motogadget. The knurled foot pegs are custom items.

For the exhaust system, Augment kept the stock headers, but fabricated a pair of connector pipes in order to fit classic cocktail shaker mufflers. The new sections were left raw on purpose, so that they could develop their own patina over time and add more character to the build. 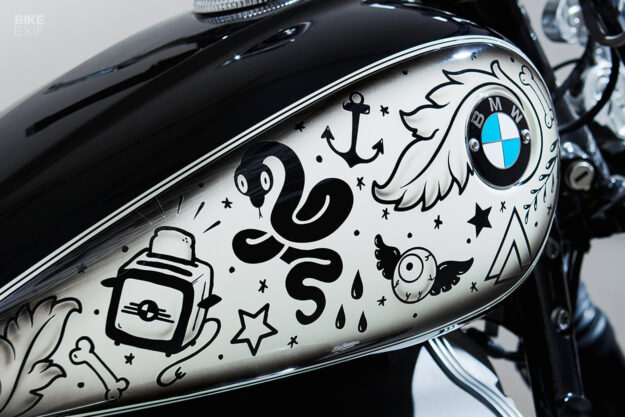 Finally, Augment called in Amanda at Black Widow custom, who wrapped the bike in an eye-catching, tattoo flash-inspired paint job. Look closely, and you’ll spot a lot of motorcycle iconography—including a few nods to BMW’s heritage. (Bonus points to anyone who gets the toaster reference.)

It’s an audacious livery, but then again, that was the whole point. “In the end, the philosophy of choppers for me is simple,” says Nick. “Strip everything that isn’t needed, and focus on all the small intricate details that give the bike an overall great, timeless look.” 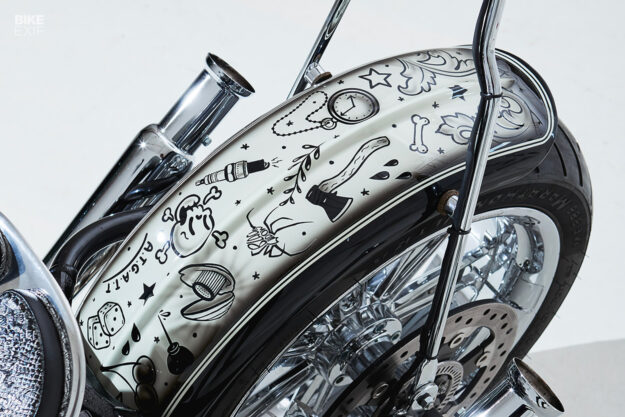 Nicknamed ‘El Boxeador,’ this chopped BMW R18 is as unapologetic as it is quirky. Even if it’s not your cup of tea, you can’t deny that it has massive amounts of moxie. 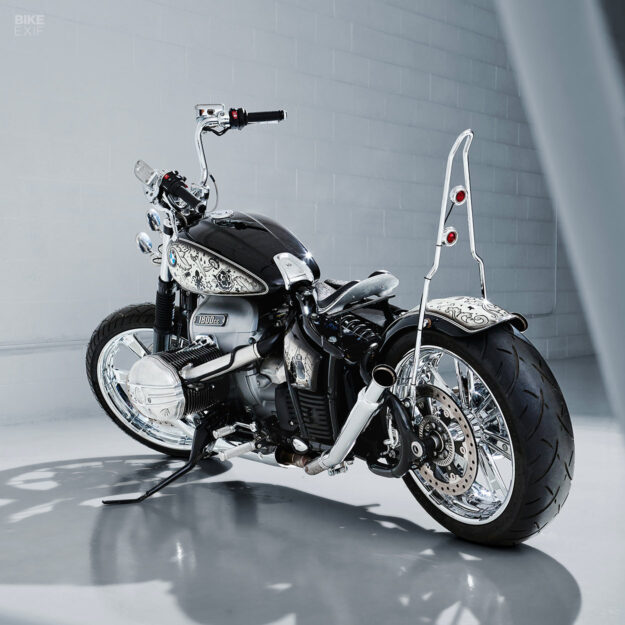