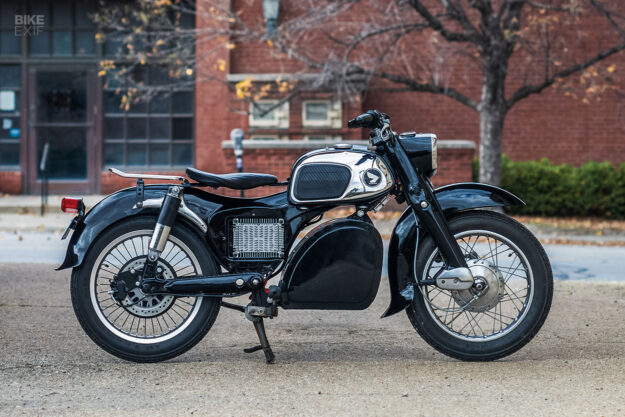 What’s the hardest part of converting a classic motorcycle to electric? You might think it’s sourcing an appropriate drivetrain, or wedging it into a chassis designed for an internal combustion engine. Sure, those are all notable challenges—but the real trick, is pulling it off without ruining the bike’s vintage aesthetic.

Amateur bike builder Danny Mantyla has it all figured it out. He’s just treated this 1967 Honda CA160 Dream to an electric motor swap. And he’s done it so well, that it arguably looks even cooler than it used to. 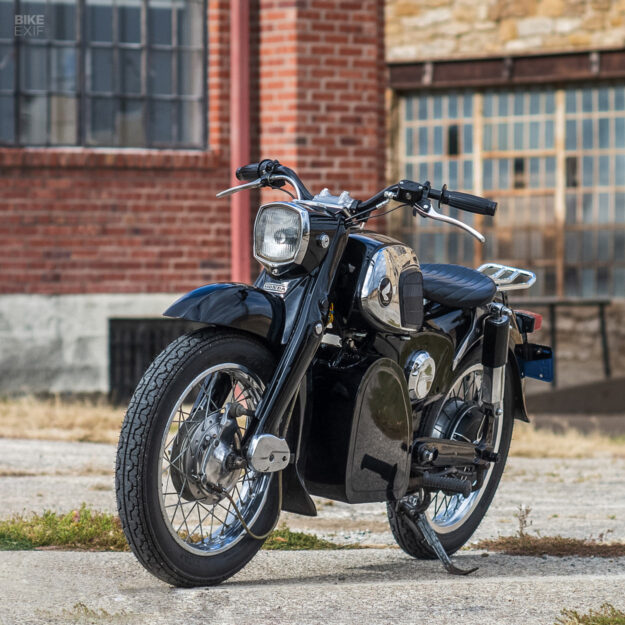 “One night I was showing my wife a picture of a Yamaha XS650 and a red Honda CA160,” Danny tells us, “and I asked her which one she liked best. She said the Honda, but only if it was black. That night I woke up in my sleep and started looking at Craigslist for no particular reason.” 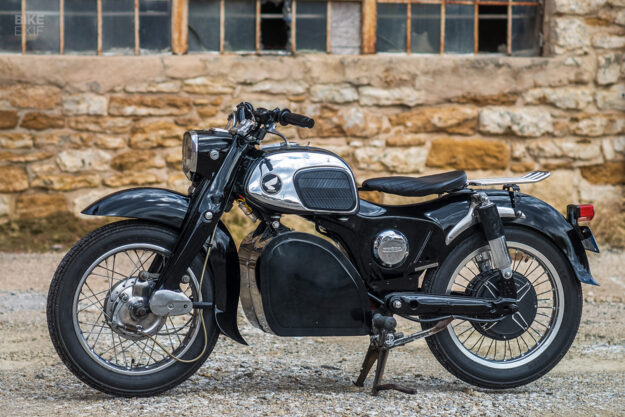 Thanks to a decade spent sitting in a barn, the Dream’s engine was completely seized. A busted engine, and a stamped frame good for hiding wires, are good ingredients for an electric conversion. But Danny had more than one reason for the swap.

“I wanted my wife to be able to ride a motorcycle alongside me, but she doesn’t know how or want to learn how to use a manual transmission,” he explains. “She is also really sensitive to the smell of gasoline and exhaust fumes, and she hates loud motorcycles with a burning passion. So this electric bike is perfect for her.” 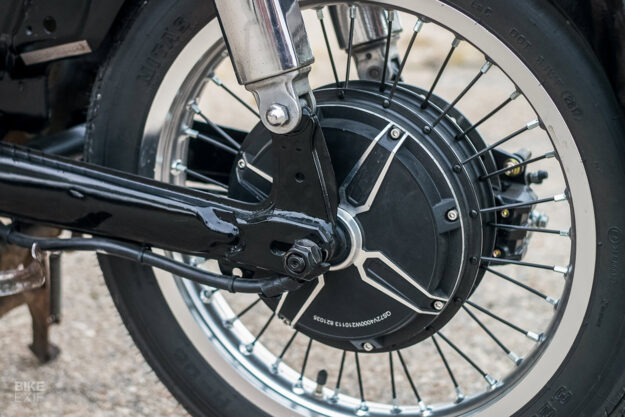 Danny pieced together a 72v system, using a 4kW hub motor from QS Motors and a controller from Kelly Controls. For the battery, he built his own pack out of used, up-cycled LG Chem pouch cells. But it’s how he put it all together that’s really impressive.

With the Honda Dream stripped down and on the table, Danny was taken by the swooping silhouette of the sculpted frame, and the curvaceous fenders. So he knew that whatever he added needed to complement that, not fight against it. 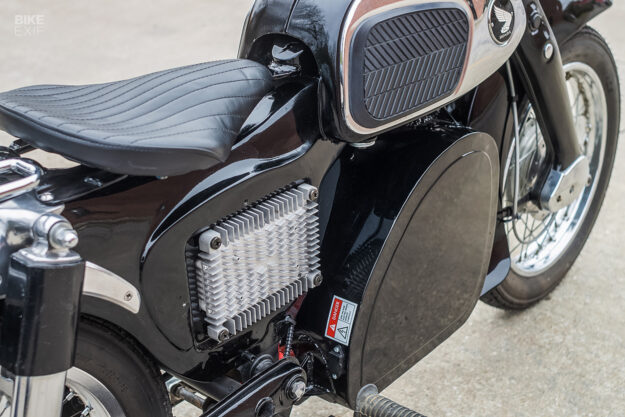 “If Honda made an electric motorcycle in the 1960s,” asks Danny, “what would it look like? This was the design goal when building the battery enclosure.”

With that in mind, he fabricated a teardrop-shaped enclosure, using a bead roller to add some character. A testament to Rob’s creativity and metalworking skills, it sits within the Dream’s frame as if it came that way from the factory. And it can be split in half in a jiffy, if you need to access the battery pack. 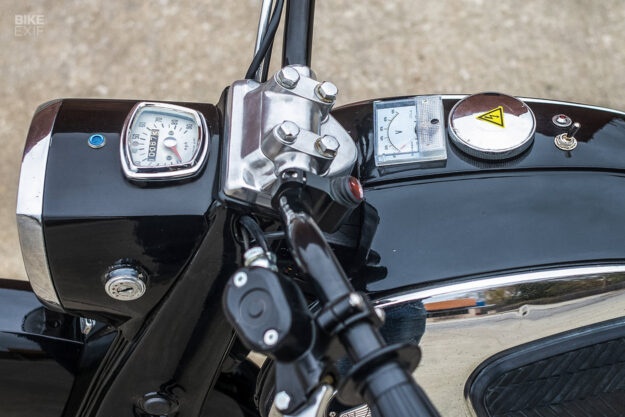 The controller was mounted directly into the recessed section of the frame where the old lead-acid battery used to live. On the other side of the frame, a discarded chrome clutch cover was repurposed as an access point for the controller’s wiring.

Danny packed a DC-to-DC converter into the old fuel tank, then installed an analog charge meter, power switch and indicator light up top. It’s a traditional EV conversion trick to turn the old filler cap into a charge port—but the Dream’s filler neck was too narrow for this to work. So the charge port hides away against the back of the battery case instead. 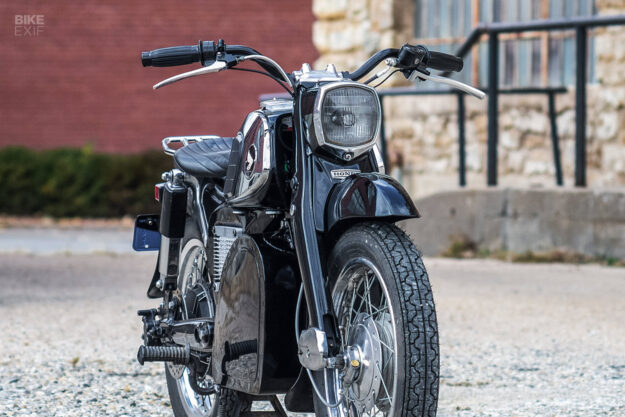 The Honda’s OEM headlight bucket and glass were restored, then retrofitted with LED internals. There’s a kill switch on the handlebars too, for good measure, but the rest of the controls look suitably vintage. Danny scored the solo seat from a local swap meat, and he found the luggage rack at an antique store.

As for performance, it’s modest at best—but going quick or far wasn’t the goal here. The top speed is around 55 mph, which is a little shy of the CA160’s original 68 mph top speed. And since the up-cycled batteries only have around 66% of their original capacity, the real world range is about 20 miles. 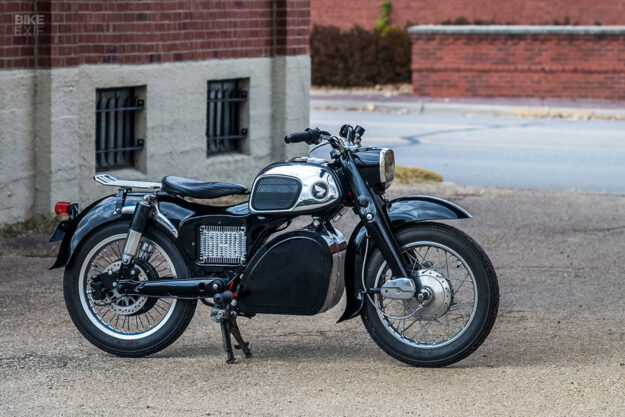 Still, Danny says it’s a pleasure to ride. “It’s so smooth and silent, it’s honestly like a really heavy bicycle that is magically self-propelled. Riding it just puts a smile on my face, it’s a very pleasant experience.”

“My favorite is when someone sees it—someone who knows nothing about motorcycles—and they just look at it and see a nicely restored, but otherwise normal, classic motorcycle. They don’t even realize that it doesn’t have a gasoline engine.”

Head over to Danny’s website for a full breakdown of his electric Honda Dream build, including costs. 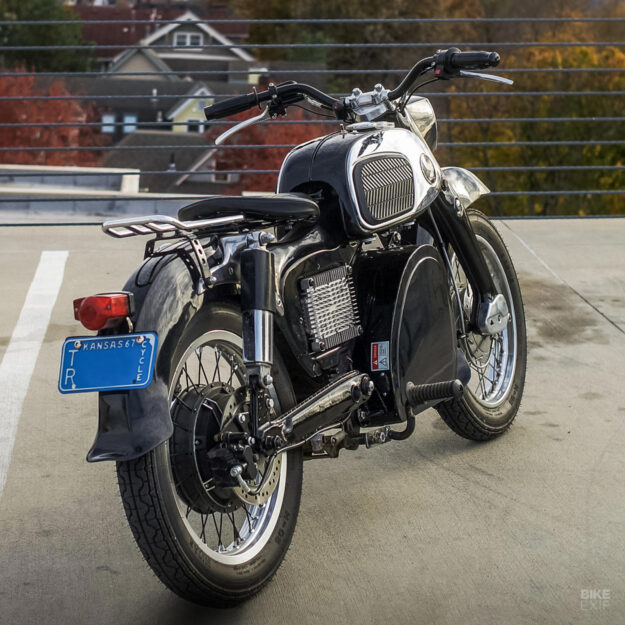