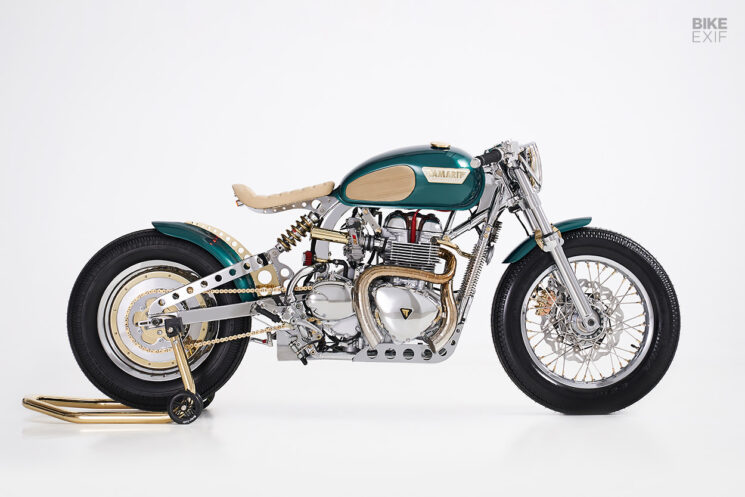 The value of a precious stone is rarely negotiable. Diamonds, rubies, and sapphires are priced based on cut, clarity, color, and carat weight. But this Triumph, dubbed ‘Emerald,’ is something different altogether, with a value waiting to be defined at the Bonhams auction house in Paris.

Tamarit Motorcycles is a custom-bike-making powerhouse in Alacante, Spain, focusing exclusively on Triumph’s air- and oil-cooled Bonneville platform. Emerald is the 129th build to roll out of the shop since it was founded in 2019, and the 13th to bless the pages of Bike EXIF. 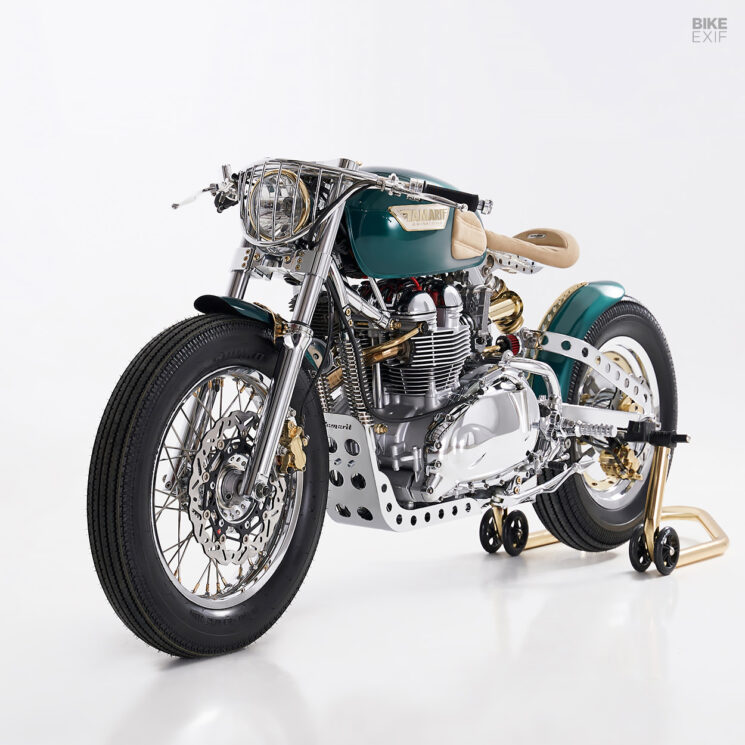 Many of Tamarit’s builds are approachable bikes—comparatively affordable machines with tasteful and practical mods. Many of the parts used on them are available to customers, and the general shapes are attainable. Emerald, however, joins previous Tamarit builds ‘Jade’ and ‘Circe’ in an elite group, referred to as the ‘Jewel Collection.’

These motorcycles are built to the highest standards. They are rolling and functional sculptures with more creativity, talent, and time invested than any spec sheet or quick wrap-up could encompass. 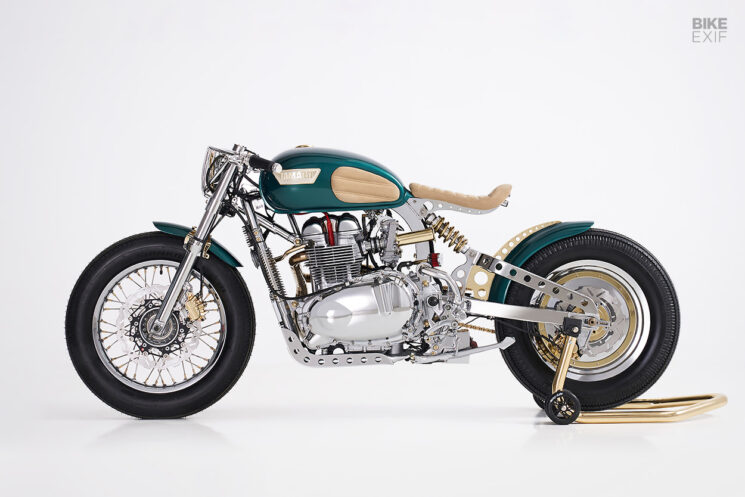 Starting with a carbureted Triumph Bonneville donor, Tamarit sketched out a design, then created a digital render to guide the project. While Jade, the first of the Jewel Collection, was an upright café racer, Emerald gets many of its design cues from Circe—a stripped-down bobber with a floating solo seat.

Emerald is immediately striking. Every metal surface shines in polished gold, brass, or chrome; large speed holes adorn the swingarm, skid plate, fender support bracket, and saddle mount. Foot controls are mounted high and toward the bike’s rear, with low handlebars that give it an aggressive stance. 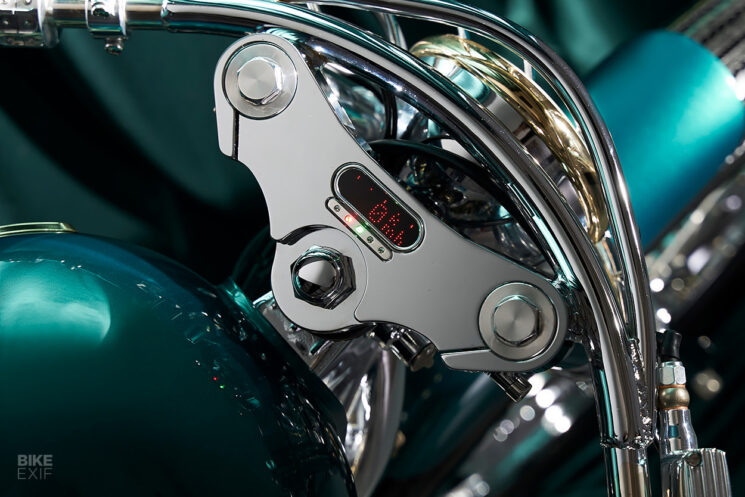 But with over 650 collective hours into this build, by eleven craftspeople, the devil really is in the details. Take a closer look at the handlebars. They’re welded directly to the top clamp, but expanded upon to now serve as a headlight cage too, with vertical rods covering the lens and connecting to a bar below the light.

A Motogadget speedo is integrated into the top clamp, keeping the rider’s view clean and clear, while still allowing for a variety of instrumentation. Like most of Tamarit’s builds, this bike also features a Motogadget mo.unit as the ‘brain’ of the machine’s new electronics system, greatly simplifying the wiring. The switches, bar-end turn signals and mirrors [not pictured] come from the German brand too, while the classy controls are KustomTech parts. 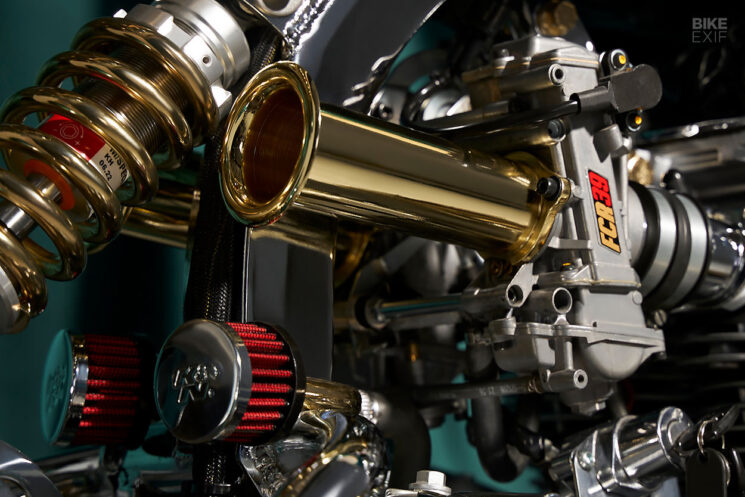 As we saw on Circe, a new oil-cooling system replaces the front down tubes of the bike’s frame, allowing it to run cooler overall. The battery now sits behind the engine toward the bottom of the bike, out of sight. Dual Keihin FCR39 carbs are fitted, with long velocity stacks that extend back toward the gold spring on the new Hagon shock.

Two pieces of heavy gauge chromed steel serve as the mounting points for both Emerald’s custom mono-shock setup, and its suede-covered solo saddle (the same suede is integrated into the fuel tank’s knee pads). The extended swingarm is a custom part. 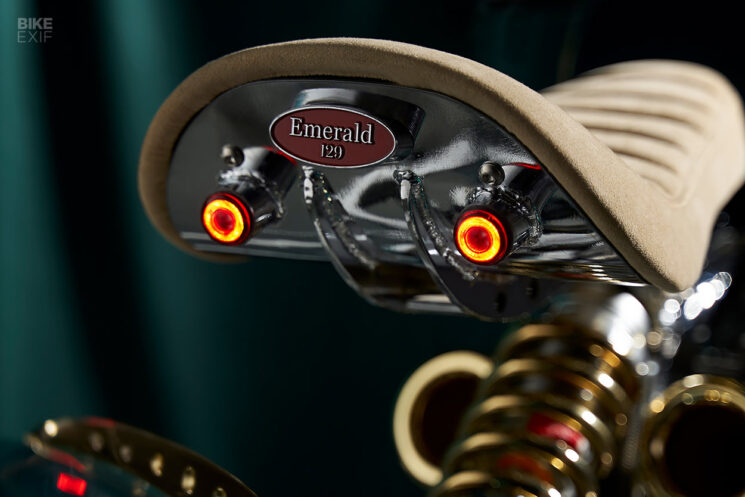 Peek behind the chromed seat pan, and you’ll spot an integrated taillight and turn signals, and the bike’s unique nameplate. A custom fender hugs the enclosed rear wheel.

With so many modifications made to the Bonnie’s chassis, Tamarit wanted to ensure the frame was still strong enough to handle a thrashing. So they reinforced it in places, then sent the bike into a laboratory to stress-test it. 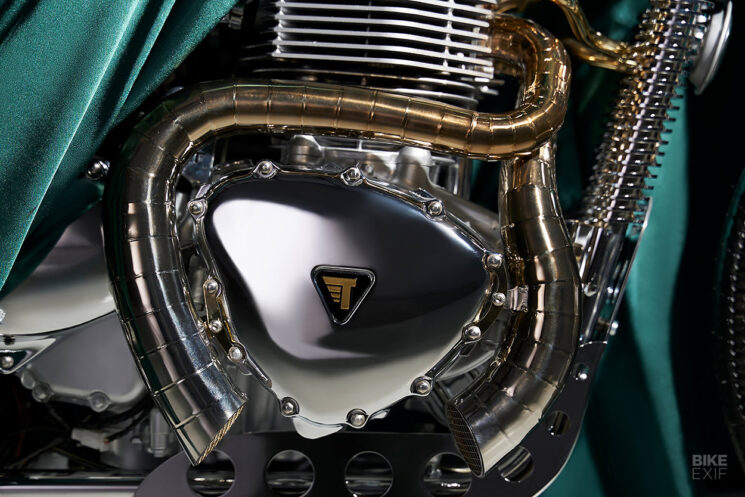 The Bonneville engine was completely rebuilt too, for performance and reliability. Oversized pistons were set in realigned cylinders, with a flattened cylinder head and fresh valve seals.

A one-off exhaust system was handmade, short and loud with a slight flare toward the end of the tube. The heat anodization on the exhaust just happens to match the chrome and brass finishes perfectly, while a shimmering green paint job covers the tank and fenders. 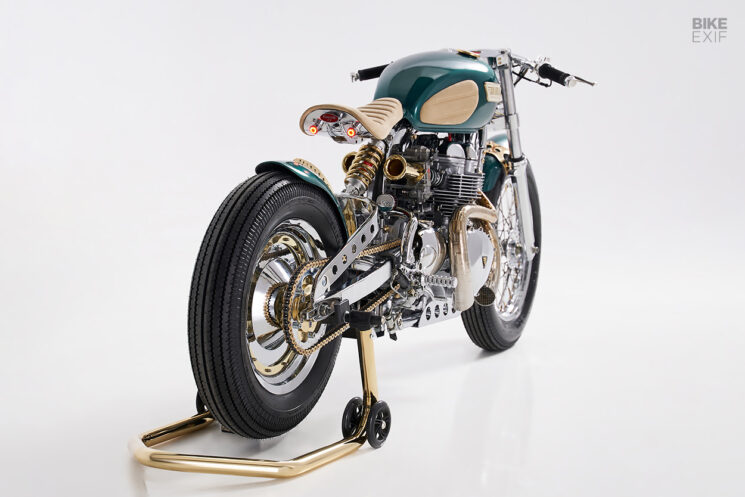 How does one put a price on a machine with 650 hours of labor and so many creative ideas implemented? Well, you don’t.

Tamarit has decided to let the people define the value through the famous British auction house Bonham’s, in Paris in just under a month. Circe and Emerald will both find themselves on the auction block, available to the highest bidder. 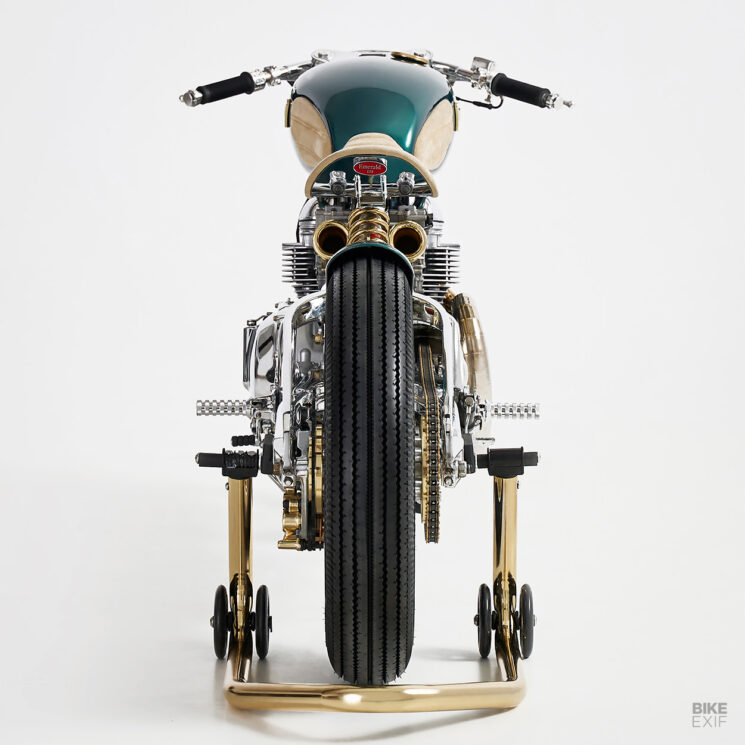