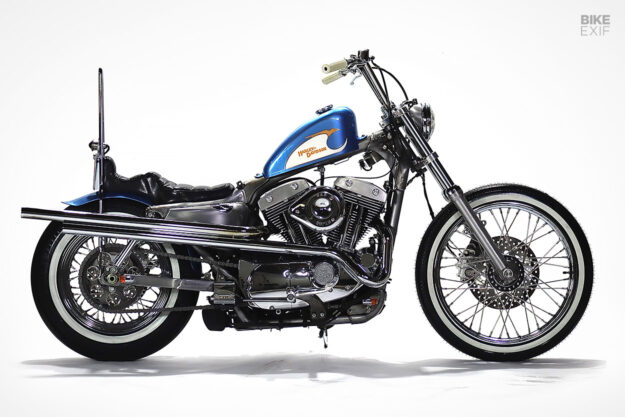 It’s barely been a month since Harley-Davidson announced they were ending the Evolution-powered Sportster line, but great custom examples continue to roll out of workshops. It’s easy to see why—the versatile Evo Sportster is one of the cheapest bikes in the Harley lineup, and lends itself well to customization. Plus Sporty owners are constantly drowning in the millions of aftermarket parts available to them.

One man who knows both Sportsters and aftermarket parts well is 23-year-old Huang Jiahuan, from Kunming in China’s Yunnan Province. It’s not often we see custom bikes from China, let alone from someone as young as Jiahuan. So it’s great to see the scene alive and well. 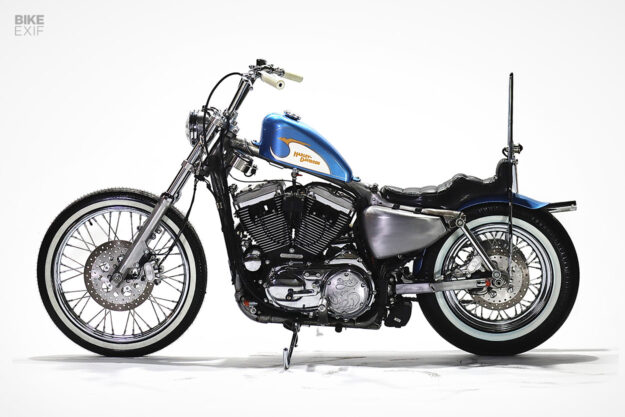 Working out of his workshop, Sowing Garage, Jiahuan spends most of his time manufacturing parts, rather than building full-on custom bikes. But the stars aligned recently, and Jiahuan was asked by a customer in Beijing to do a full rework on his 2018-model Harley-Davidson Sportster.

“The majority of Chinese chopper lovers still have a hard time doing it themselves—even if I supply them with the right parts,” says Jiahuan. “I rarely see Chinese mainland custom bikes on Bike EXIF, so I started wondering if I could do it myself.” 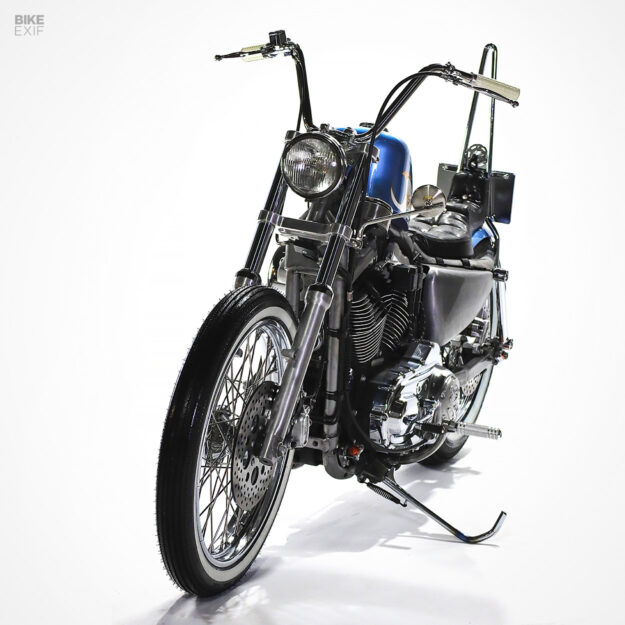 The plan was to build a slim chop that could slip through the crowded capital city streets, all while retaining some classic chopper aesthetics. “We wanted Eastern and Western cultures to collide—and it had to be functional. A good-looking vintage bike sitting still on display will never be good enough.” 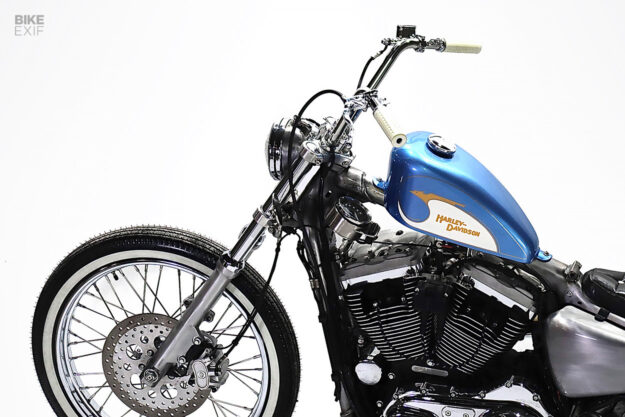 Jiahuan started up front, with a set of narrow fork yokes from the Sowing Garage catalog. Designed to work with the OEM fork legs and headlight, they’re a good match for the skinny new 21” front wheel. A solid-mounted Neofactory GTS brake disc slows things down. 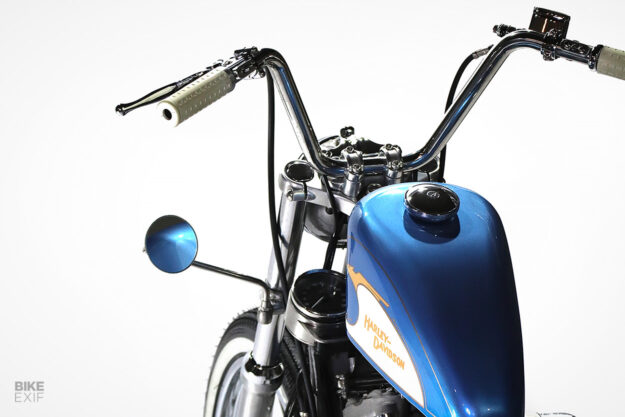 A set of risers and bars from Japan’s Fork Co. sit up top, fitted with with new grips. Jiahuan went for a minimalist look for the bars, with a Sowing Garage internal throttle kit, Kustom Tech brake and clutch levers, and classic micro switches. The factory speedo was relocated to the left-hand side of the tank, behind a single mirror from Motor Rock.

The fuel tank itself is a custom piece—as is the Cobra-style seat and sissy bar. The only other bodywork is a stubby custom-made rear fender. Just below it is a pair of rigid rear struts from Sowing Garage’s own stock. 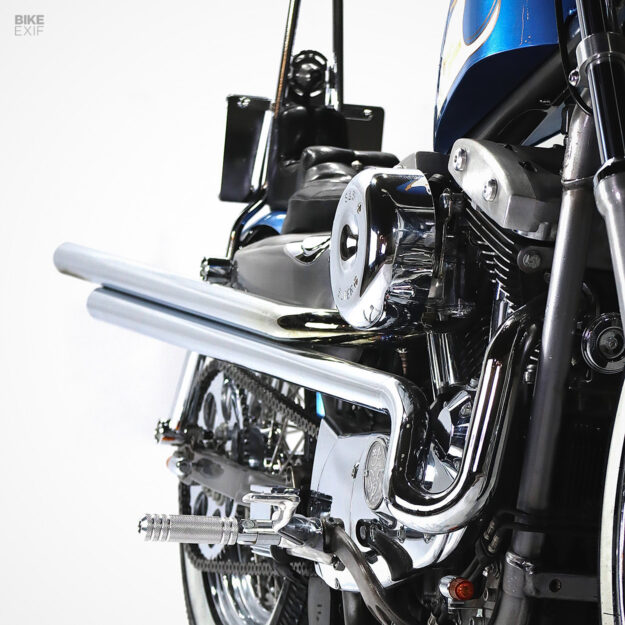 Moving to the Sportster’s Evolution engine, Jiahuan left the internals alone, opting for external upgrades only. On the right sits a set of Sowing Garage high-mounted exhaust headers, with mufflers from Crazy Orange MC in Japan. The ignition system was replaced with a Dynatek unit, and, to keep it old school, the EFI system was replaced with an S&S Cycle carb and intake.

On the left, the coils have been relocated by way of a Sowing Garage bracket. The engine also wears die-cast timing and primary covers from the shop, and rocker covers from EMD in France. 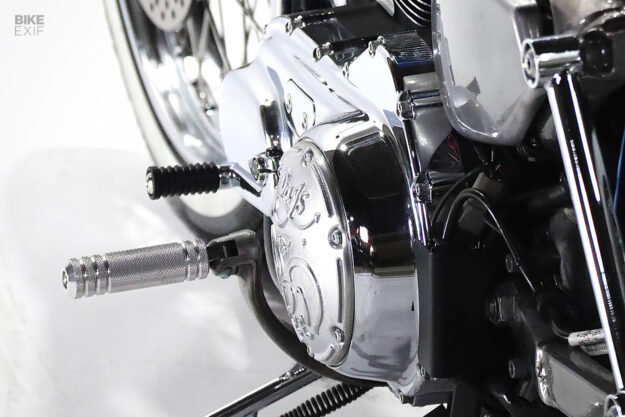 Finishing kit includes a Sowing Garage side stand, and a Motor Rock taillight. The turn signals are barely noticeable—but they are there, mounted low down at both ends.

Then there’s the paint job. Playing on classic Harley-Davidson themes, and executed in-house, it’s a stunning mix of blue, white and gold. 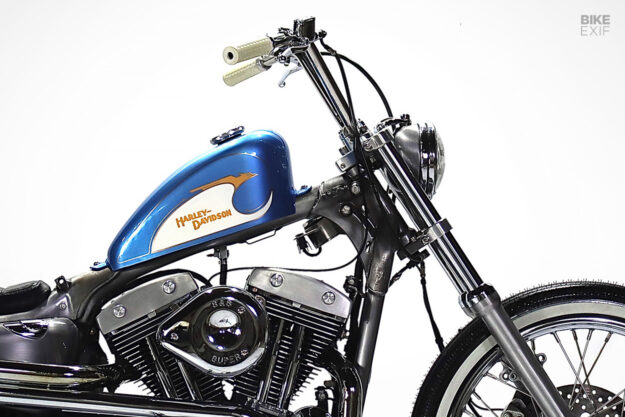 “I started this project alone,” says Jiahuan with a smile. “Friends and partners came and went throughout the build, and it made me realize that I really like this type of work.”

We adore skinny Eastern-style choppers as much as we love classic Western ‘Easy Riders,’ and Jiahuan has mixed those styles together with skill and taste. Harley-Davidson may have given the Evo Sportster the axe, but this build proves that it’s still worth chopping. 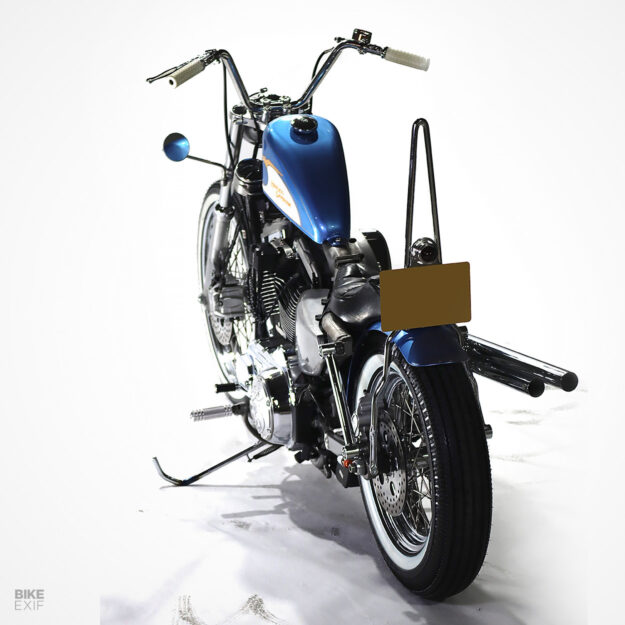 Work of fiction: A custom-built TriBSA with an origin story